Even though employment options and entrepreneurial opportunities are few in Jamaica, it seems as if many Jamaican youth would prefer not to pursue agriculture as a career.

Data from the Rural Agricultural Development Authority [RADA] (2006) revealed that up to that time, the average age of registered farmers in Jamaica was 57.5 years old. The data also revealed that farmers between the ages of 16 to 25 only represented 3.2% of the total number of registered farmers in Jamaica, with most farmers being over 40 years old.

Why are young persons not choosing agriculture as a career?

The majority of youth surveyed have a poor perception of agriculture, many believe that a career in agriculture would cause them to have low income and social status.

The main reasons given by Jamaicans for agriculture not being a popular career choice among youths included:

Not enough Jamaican youth are choosing to pursue careers in agriculture

The in-depth interviews with the experts from the Ministry of Agriculture ( ‘Youth in Agriculture’ Programme and RADA); IICA; the Jamaica 4-H Clubs and ICT4D Jamaica corroborated the notion that not enough Jamaican youth are choosing to pursue careers in agriculture. Of greater concern was that agricultural schools [such as Ebony Park HEART Academy, College of Agriculture Science and Education (C.A.S.E.) etc.] are producing agricultural graduates but only a few are focusing on cultivating the land for farming. One of the main reasons highlighted for this shying away from fieldwork is that graduates do not want to do ‘dirty’ laborious work in the field, and that they abhor having to toil in the sun.

A significant percentage of Jamaica’s top agriculture graduates are migrating to other countries soon after graduating. This is due in part to graduates succumbing to the allure of being paid substantial salaries overseas for their skills. Further, it was common to find that graduates view agriculture in Jamaica as a dying industry. This is why most feel motivated to migrate to countries such as the United Kingdom, the United States and Canada, where they can benefit from lucrative opportunities in agriculture. The end result is that Jamaica suffers major ‘brain drain’ when these ‘brighter’ agriculture graduates opt to leave the country for ‘greener pastures’.

Link between ICT and Agriculture

ICT is defined as the combination of computer technology with communication technology to process, send, and receive information. 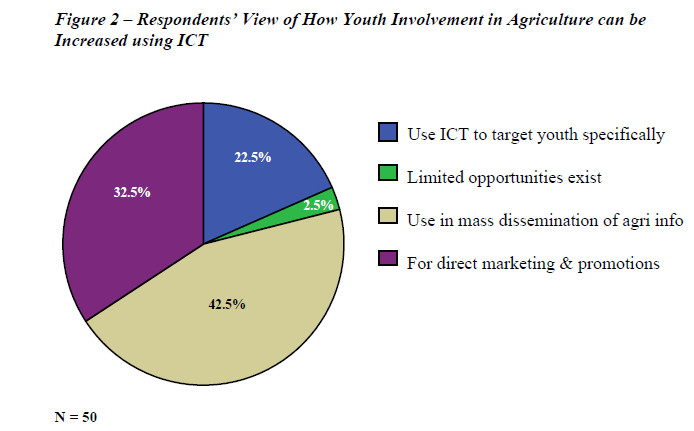 ICT can be used as a tool to encourage more youth to pursue careers in agriculture. The idea here is to use ICT to share pertinent agricultural information with youth in new and exciting ways. Our research also revealed that youths see agriculture as a primitive occupation, which is labour intensive and out of touch with modern technology, while on the flip side, they view ICT as something that is cool, progressive and modern. It is evident that in order to use ICT as a mechanism for increasing youth involvement in agriculture, it will be important to show youth, a clear link between ICT and agriculture.

It is expected that more youth could be motivated to pursue agriculture, if for example, they saw where the Government was spending money to develop the agriculture sector in Jamaica:

If the Government address these issues, it would be of great importance to properly sensitize youth about the opportunities that exist for involving them in the development of the agriculture industry. This is where ICT could play a critical role in sharing information with youths, thus starting the process of influencing them to choose careers in agriculture.

Most of the youth surveyed in this study believed that ICT could be used to develop strategies that serve to increase youth involvement in agriculture, by facilitating the dissemination of positive messages.

Thus we concluded that some Jamaican youths may be persuaded to choose agricultural careers, using ICT as an enabler. Given the growing fascination with ICT tools, such as the Internet and cell phones, we believe that the appeal of ICT as being cool and modern will help in the erosion of youth’s negative stereotypes about agriculture in Jamaica (especially as it relates to them viewing the agriculture industry as primitive). 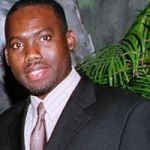 Keron Morris is a Communication Professional with over twelve (12) years of experience in communication management, having expertise in all areas of communication theory and practice.

Keron holds a first degree with a double major in Media & Communication and Zoology from C.A.R.I.M.A.C. and Pure & Applied Sciences, U.W.I., Mona Campus, and a Master’s degree in Communication for Social and Behaviour Change from C.A.R.I.M.A.C., U.W.I., Mona Campus. Keron also has a Law degree from U.W.I., Cave Hill Campus, and is currently pursuing a Certificate of Legal Education at the Norman Manley Law School (Final Year).

At Balcostics our mission is to empower leaders with the required data and information to make better decisions. Learn more about our full list of research outsourcing services for individuals and companies: Click here